Arthur Thornley (1905 – 1977): was a mainstay of the Leicester Symphony Orchestra for almost 50 years. His leadership and determination carried the LSO through the 1930s, the war and the post-war years. Such were the difficulties in these decades, it is fair to say that without his efforts, the LSO almost certainly would not exist today.

Arthur was educated at Wyggeston Grammar School where he created the first school orchestra; giving an early indication of his talent and enthusiasm for music. He became a printer in the family business but his heart was in music. For several years he played second oboe in the De Montfort Orchestra and his introduction to the LSO came, in his own words, ‘in rather a curious way’. 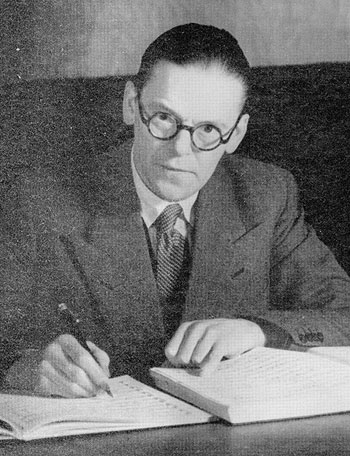 He later recalled, ‘…on a Sunday afternoon in October 1928 I received a telephone call from the De Montfort Hall… “Dr Sargent understands you have a cor anglais”, I was told. “Will you please bring it down to the hall at once.”  Arthur rushed over to the hall and was surprised to find it was not just the instrument that was wanted, but the player as well!

He survived his first LSO rehearsal, a difficult cor anglais passage from Dvorak’s Carnival, with help from Simeon Iliffe, first trumpet and future conductor of the LSO, who told him when to come in. In subsequent concerts there were other cor anglais and oboe parts  as well as parts for percussion. Arthur soon benefited from, ‘Sargent’s amazing capacity for drawing the best from….inexperienced performers. The young Sargent would patiently sort out their technical difficulties and gently lead them… to a surprisingly high standard of performance.

It was through music that Thornley met his wife Mary, nee Ashmell. She had shown outstanding talent on the violin from a very young age and played in the LSO, from the age of 14, for just short of 70 years – an achievement probably unequalled anywhere. They married in September 1934.  Arthur was soon appointed Honorary Secretary to the LSO and Mary remembered, ‘So devoted was he to his work, that after we married the typewriter came on honeymoon with us.’ It is thanks to Arthur’s meticulous record keeping that we know so much about the early history of the orchestra.

In 1933, LSO’s superstar conductor Dr Malcolm Sargent was struck down with tuberculosis, from which he very nearly died. With the help of concert promoter Harold Holt, Arthur arranged the appointment of Albert Coates as guest conductor and guided the orchestra through the merger with, and later demerger from, the Leicester Philharmonic Choir.

Sargent had the highest regard for Arthur both as musician and administrator and Arthur became the vital and trusted link between Sargent and the orchestra. One of  Arthur’s difficulties was simply getting hold of Sargent, who was always on the go. His wife Mary recalled Sargent’s proposed solution, ‘get on the train tomorrow morning with me, as far as Kettering and we will get the four concerts arranged for next season.’ Mary added, ‘This happened on several occasions and it worked very well. Malcolm Sargent had an  amazingly quick brain.’

During the early years of the war it was necessary to scale down the LSO and give concerts in the New Walk Art Gallery on a Saturday afternoon under the name People’s Concerts. Arthur conducted almost 50 concerts over a two year period. They reverted back to the LSO title on the odd occasion when Sargent was able to appear as guest conductor.

By 1942 Sargent’s growing reputation and demands both in Britain and abroad meant that it was no longer possible for him to conduct LSO. In Arthur’s own words, ‘Dr Sargent handed the baton over to me with instructions to keep the orchestra going as well as I could.’ Arthur liked to recall the time he was given his one and only lesson in conducting. This happened in the Grand Hotel, Leicester, with music propped inside the lid of Sargent’s open suit case.

It is no exaggeration to say that it was Arthur’s extraordinary determination that kept LSO afloat in these difficult years. In the words of the Leicester Mercury, ‘No one has worked harder during the war to keep music alive than Mr Arthur Thornley.’ The same paper also noted, ‘Mr Arthur Thornley is generally acknowledged to be the most versatile musician in Leicester at the present time. Not only can he play just about every instrument in the orchestra but he can orchestrate and conduct.’ 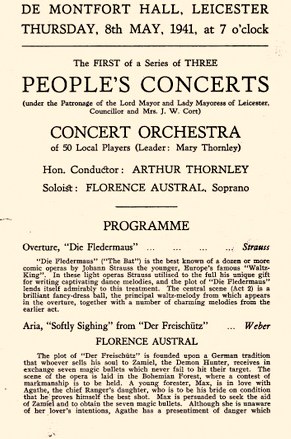 Arthur’s transcription of Bach’s Toccata and Fugue was made in response to many requests, no doubt sparked by Stokowski’s transcription used in the 1940 Disney film Fantasia. Bach’s work has been transcribed many times but, at the time, there was no available version for full symphony orchestra. Arthur’s transcription was given its first performance in De Montfort Hall in January 1942. The work has remained popular and has been played four times by the LSO in the 70 years since it was written. 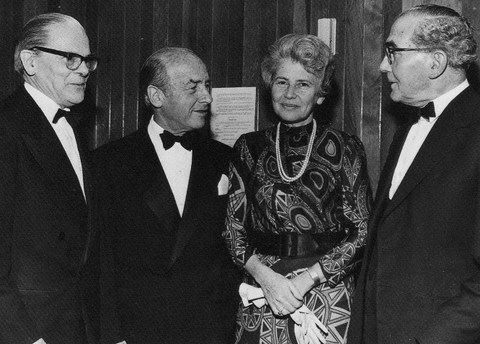 After the war he founded and directed the Leicester Opera Club and often had to arrange and transcribe music. Arthur often said he was ‘an amateur and proud of it’. The only thing he ever got paid for was a reduced version of the ‘Grand March’ from Aida published by Novello. This was done for the Little Theatre – no room for a big orchestra.

Arthur Thornley steered LSO through the lean post war years. Right up to the day he died in 1977, he was working on plans and correspondence for his beloved LSO. His tireless efforts and many musical talents helped restore the orchestra to its former standard, one of the best orchestras of its type in the country.