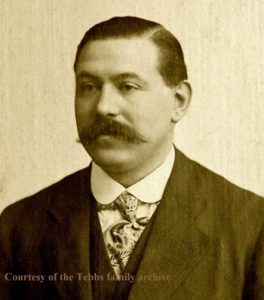 George Robert TEBBS (1871 – 1923) was a modest man at the centre of music making in Leicester in the decade before the Leicester Symphony Orchestra was founded in 1922. He was the much loved founder of the De Montfort Orchestra, Leicester’s first full symphony orchestra to perform on a frequent and regular basis. George was acknowledged to have played a significant part in laying the solid foundations on which the LSO was built.

He was born to Robert and Frances Tebbs in Melton Mowbray on 28th February 1871. His father Robert was 47 and trading as a brazier or worker in brass, and the family were living over their shop in the Market Place. The census of 1871 shows that his grandmother Elizabeth Tebbs, a lady of 78, was living with the family and assisting with the business. 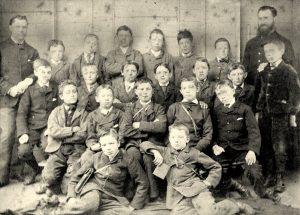 George attended the British School in Melton Mowbray and on this school photograph taken when George was about ten, he is indicated centre right, with a cross. His father, now 57 years of age, had retired. In 1886 his father died and left a will which provided that George should inherit his piano. This could be taken as an indication of George’s active interest in music which was to play such a huge part in his life. 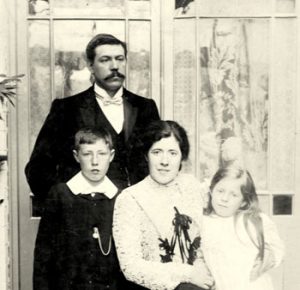 The census of 1891 shows that the family business had moved to Leicester and George, who was employed as an ironmonger’s assistant, was living with his widowed mother. One year later George married Janet Stafford of Ashley, Northants. A son, Rupert Egerton was born 1893 and a daughter, Alice Marjorie known as Marjorie, was born 1894. The picture on the next page shows the young family. The census of 1901 shows that George’s mother Frances was still living with the family and they also had a live-in domestic servant.

In 1895 George set up his own ironmongery business at 20 Humberstone Road, Leicester and for nine years the family lived over the shop. The business prospered and expanded into additional premises in Wharf Street. Success in business however was contrasted with events of the most heart rending kind for the family.

In 1903 the eight year old Marjorie died of diphtheria and within three years fate had dealt an unimaginable second blow, when George’s wife Janet died at the age of 33. The death certificate gives the cause as heart trouble but the story passed down through the family was more definite. She had died of a broken heart following the death of her daughter.

George had always taken a keen interest in music and it seems likely that this double tragedy acted to increase his involvement. In 1906 he moved to 158 Melbourne Road and a friend commented that it was rare to pass his house without hearing the sound of music coming from within. We see him here pictured playing his cello with a small group of friends.

George was an accomplished all round musician, who could play trumpet, cello, cornet, trombone and percussion. His knowledge and skills were much in demand in the Wesley Hall Orchestra which he joined soon after the opening of the Wesley Hall Methodist Church in Highfields in 1897.

Developing this orchestra became George’s life’s work and the process by which this happened was described by a friend and fellow member, William Taylor. ‘George Tebbs was a modest man who started as trumpet but was soon pressed into service as deputy conductor, and later as conductor. A small string band was developed into a complete orchestra, a self supporting society had been founded, a large library of standard compositions had been purchased and every requisite for their rendering provided.

From the outset a fine social spirit had been sustained, rehearsals became hours of pleasant recreation, summer excursions and an annual reunion induced good fellowship and the biggest thing of all – an audience had been created.’

Mr Taylor continued, ‘One steady purpose ran through it all, a determination that the poorest citizen should have opportunity to hear good music well rendered. Gradually most of the capable instrumentalists of the town attached themselves to the organization, symphonies were performed with every part going, and a crowd of working people came to listen to Beethoven and other great composers.’ 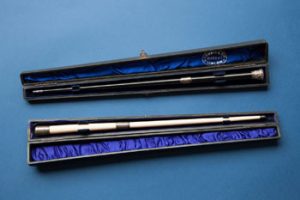 Two conductor’s batons are included in the family’s collection relating to George. It can be assumed that these were presented by the orchestra as a token of appreciation following major musical events. One is dated 1909, the other is undated. 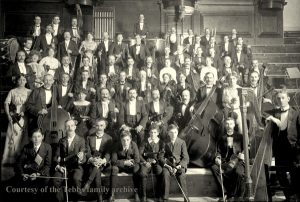 The orchestra changed its name to the De Montfort Orchestra on the occasion of the opening of the De Montfort Hall in September 1913. It performed the inaugural concert of the new venue and this magnificent photograph was taken to mark the occasion, a copy of which is held in the Leicester Records Office. The orchestra is seen with its much loved conductor in the centre with baton. Most of the other musicians have been identified. There were free Sunday night concerts once a fortnight, which were very popular. Classics were interspersed with lighter popular pieces. George Tebbs had achieved something not done before – he had created Leicester’s first full symphony orchestra which played on a frequent and regular basis.

Friends paid tribute to George’s generous nature and unselfish values. It was noted that, ‘all who came into intimate fellowship with the De Montfort Orchestra found inspiration in the example of the conductor… His enthusiasm for music resulted in a great service, the full value of which is scarcely yet known.’

By the age of 45 George had sold his business and done so well that he was able to retire and devote himself full time to music. In addition to running his orchestra George was a familiar figure in local music circles and regularly helped with the organisation of military and brass band contests. He took a keen interest in the Leicester Imperial Band and attended all their contests for many years, wherever and whenever they occurred.

On many occasions George gave help and advice to Councillor George Hilton, the Musical Director for the Corporation. This was usually on the arrangements needed when staging popular events, whether in the parks or at De Montfort Hall. Councillor Hilton acknowledged the value of the practical help given by Mr Tebbs which he said, ‘cannot be over estimated’. 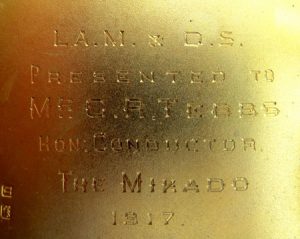 George also conducted the Leicester Amateur and Dramatic Society (the Amateurs) in a selection of Gilbert and Sullivan operas over a six year period. As a conductor his readings were, ‘always sound and musicianly’. On several occasions he was presented with engraved items such as this hallmarked cigarette case, aside, given after the 1917 production of the Mikado.

Early in 1919 George conducted the Amateurs in the Gondoliers at the Leicester Royal Opera House. On the afternoon of the matinee a young Dr (later Sir Malcolm) Sargent, organist and choirmaster from Melton Mowbray, came with his friends. Such was their enthusiasm that by the time they had motored back to Melton they had made a decision – to set up their own amateur operatic society in Melton. 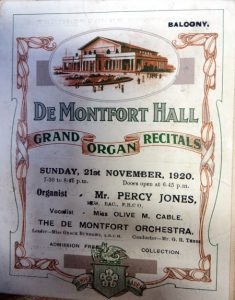 In the summer of 1922 auditions were held for a new orchestra the Leicester Symphony Orchestra, initiated by William Russell a music shop owner and his son Karl. It seems that the De Montfort Orchestra, which had served the city so well for ten years, was no longer attracting the audiences it once had. It now faced a serious threat from the new orchestra which was to be conducted by the charismatic and exceptionally gifted Malcolm Sargent, who was destined to become one of this country’s greatest conductors. Sargent was rapidly gathering followers and had already shown that he was capable of attracting capacity audiences to the vast De Montfort Hall.

The Leicester Symphony Orchestra drew musicians from far and wide but the nucleus of players was recruited from George Tebbs’ De Montfort Orchestra. Grace Burrows, regarded as Leicester’s best violinist, led both orchestras over a 30 year period. George’s son Rupert who was a keen French horn player also played for both orchestras.

George died unexpectedly at the age of 52. He had not been feeling well and was admitted to the Leicester Royal Infirmary where he died following an operation. The cause of death was given as kidney failure. He died 12th December 1923, not 1925 as recorded on his grave stone.

George was laid to rest with his wife Janet and Marjorie, his daughter. He would be joined eventually by his mother Frances who died in 1938 aged 96 years, and his son Rupert who died in 1975 age 82 years. 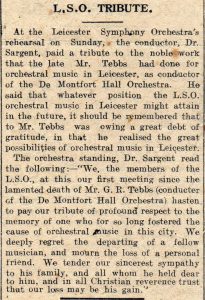 The general sense of loss was voiced by Malcolm Sargent at a rehearsal of the recently formed Leicester Symphony Orchestra. A respectful Sargent paid tribute praising, ‘the noble work of one who for so long fostered the cause of orchestral music in Leicester’ and, ‘it should be remembered that to Mr Tebbs was owing a great debt of gratitude, in that he realised the great possibilities of orchestral music in Leicester.’

Sargent fully recognised that in developing the Leicester Symphony Orchestra he was to a large extent building on the solid foundations so carefully laid by George Tebbs.

The De Montfort Orchestra survived the death of its conductor and the depletion of players drawn away by Malcolm Sargent and the Leicester Symphony Orchestra. It moved back to its old base in the Wesley Hall and was finally extinguished by the Second World War.

The author would welcome hearing from anyone who has more information on
George Tebbs or the De Montfort Orchestra. Please contact me