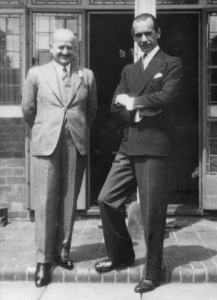 George Karl Russell (c1888 – c1960), known as Karl, was the driving force behind the establishment of the Leicester Symphony Orchestra. This followed the astounding success of Malcolm Sargent’s debut ‘Windy Day’ concert in February 1921. He was passionate about music, was a director in his father’s music shop and arranged countless concerts for audiences in Leicester and further afield. As well as helping to run his father’s music shop he was passionate about music and arranged countless concerts for Leicester audiences. He was an enormously extravagant man who moved among celebrities but whose life ended in the disappointment of business failure.

Karl’s father, William H Russell or Billy, was known as a rough diamond. In 1885 he started selling second-hand pianos and harmoniums from his house in Saxe-Coburg Street, later renamed Saxby Street. The business prospered and by the 1920s it was formally known as Wm H Russell & Son, with a shop, ‘City Piano Salon’, established at 7 London Road. Later, following redesignation, the same property is given as 99 Granby Street. For a short spell in the 1930s the business expanded into premises in Belvoir Street but this proved unsustainable. 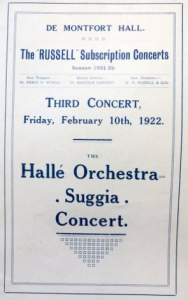 Karl was quick to act following Malcolm Sargent’s astounding success at his ‘Windy Day’ concert in February 1921. The young choir master and organist from Melton Mowbray had conducted his own specially composed piece An Impression on a Windy Day to a packed De Montfort Hall.

It was clear from the audience’s enthusiasm and even adulation, that Sargent was someone with mass appeal; for the Russells, a business opportunity too good to miss and an effective way of fighting the dominance of business rival J Herbert Marshall, owner of Leicester’s leading music shop and founder and sponsor of Leicester Philharmonic Choir (LPC).

An account of Russell’s crucial first meeting with Sargent is given in an article in the Liverpool Echo which explains that Sargent had already received an offer from Marshall to conduct LPC. The choir was already well established but the orchestra which Russell had in mind would need to be started from scratch and an audience could not be guaranteed. The conversation proceeded, as Russell recalled, until a sudden impulse made him stand up and exclaim, ‘If you go over to the other side I will fight you tooth and nail!’ This clear indication of how acutely Russell felt his rivalry with Marshall spurred Sargent’s decision. He later explained to Russell, ‘It was your determination which made me decide you were the man for me’. Russell and Sargent quickly agreed on how things should proceed.Four ‘Russell’ Subscription Concerts featuring Dr Sargent were arranged for the following season and a prominent advert placed in the Leicester Mercury, ‘The Hon directors have been fortunate in securing the services of Dr Malcolm Sargent as their Musical director. These concerts will give Dr Sargent every opportunity to display his undoubted Genius and amazing Versatility as Composer, Conductor, Pianist and Organist. These concerts will be Brilliant and Fascinating.’ It seems this was no exaggeration. Two of the original programmes, aside, are held in the Wigston Records Office.

Apparently the first concert, featuring local choirs, showed signs of under rehearsal but feeling that any difficulties could be overcome, plans for the following season were prepared. 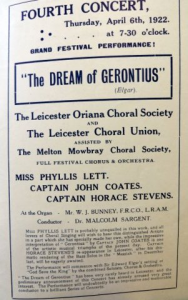 The third concert had a professional orchestra but for the first, second and fourth concerts local musicians were brought together for each concert separately. This was impractical and a decision was taken to build a full sized symphony orchestra to give regular concerts for the following season and beyond. An essential part of the plan was to enlist Grace Burrows, recognised as Leicester’s outstanding violinist, as leader. She would also help manage the new orchestra, to be called Leicester Symphony Orchestra. The first concert was to be given October 1922. For Sargent, the new orchestra would allow him further opportunities to build support and win national recognition.

Sargent remembered Karl Russell as, ‘a small dapper man who was very particular about his appearence, went to London regularly to get his hair dressed, played the piano plausibly, collected expensive editions of the classics and lived in a big, tastefully furnished house in Ratcliffe Road, Stoneygate‘. The photograph above shows Russell and Sargent, in front of the French doors at the rear of this house. 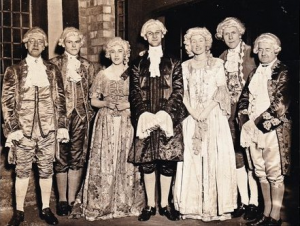 A vital feature of Russell’s music shop was its ticket office. This brought large numbers of concert and theatre-goers into the shop. Many of the events had been promoted by Karl Russell himself.

The shop holds fond memories by many former staff. The most important thing according to one former employee quoted in the Leicester Mercury in 2011 was, ‘Mr Karl Russell himself, bringing top artists, orchestras and entertainers to Leicester. Accomplished musicians practising, famous people visiting, it was all there – Russell’s was a wonderful place to work.’

The illustrations below show Russell’s publicity from the Leicester Symphony Orchestra archive. The brown one is from 1925; note that the words salon, salons and saloons seem to be interchangeable. The blue one is from 1933. 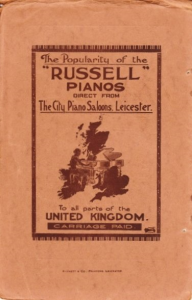 The photograph above was supplied by Olga Weston, the daughter of Arthur and Mary Thornley. Olga particularly remembers Karl Russell’s very fashionable light grey suits. This is the only picture she has of Karl, taken at a fancy dress event in the post war years. All of the group were heavily involved in music making in Leicester. They are; Frank Muston – played violin and viola in the LSO and was headmaster of Alderman Newton Boy’s School, Arthur Thornley, Mary Thornley, Haydn Hopkins, the Thomases – both involved in light opera and Karl Russell.

Haydn Hopkins (for many years lead cello of the LSO) worked with Karl Russell for 20 years from 1929 when he left school. He became a partner in the business but this was dissolved in 1950 when he left to become a teacher at Roundhill School. On one occasion they travelled together, in pursuit of music, to a Wagner festival in Bayreuth. Karl was enormously extravagant. He went to London frequently, often to Covent Garden to dine at the Savoy. He met countless celebrities including Eva Turner, famous for Turandot and many Wagnerian roles. The last time she sang Turandot was in 1948 on which occasion she dined with Karl Russell. 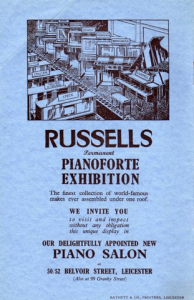 It is clear that until the 1950s both father and son had made a very good living out of their business. Unfortunately Karl failed to keep up with the changing landscape of the retail world. He seemed to be blind to the changes or just refused to acknowledge them. By the mid 1950s the business had failed.

Karl Russell retired to the south coast and in 1958 Sargent, conducting in Hastings with the BBC orchestra, took the opportunity to call on the man who, nearly 40 years earlier, had helped launch his career with the four ‘Russell’ Subscription Concerts and the founding of Leicester Symphony Orchestra. Sargent’s description of Karl Russell shows that much had changed. Karl was, ‘battered by ill fortune and folly’ and ‘a pathetic old man – with two years to live’.