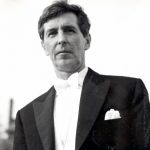 Michael Tippett (1905-1998), later Sir Michael, has no direct connection with Leicester Symphony Orchestra but I have included an entry on him here because his path crossed that of Malcolm Sargent significantly during his formative years. It was after seeing one of Sargent’s Russell Subscription Concerts – the forerunner of the LSO – that Tippett decided that he was going to be a composer. Later, he conducted the Leicestershire Schools Symphony Orchestra many times in De Montfort Hall, Leicester. This picture is from 1965 by kind permission of the LSSO.

Michael Tippett was 10 years younger than Malcolm Sargent. Both were pupils at Stamford School and both took piano lessons with Mrs Tinkler in the town. During his Melton years Sargent supplemented his income by teaching at Stamford School. Tippett, who was beginning to show an interest in music, clearly recalls becoming aware of the ‘slim, well dressed’ music teacher who was known as ‘the Young Doctor’. He was frightened but fascinated by Sargent who he described as so, ‘un-school’.

It was soon after this, in February 1922, that Tippett was one of a coach party of boys from the school that went to De Montfort Hall to hear Sargent in one of the Russell Series Concerts. Tippett was considering a career in music and this was a turning point. It was the first time he had heard a symphony orchestra – the programme is shown aside – the concert included a modern work: Ravel’s Mother Goose Suite, which made a great impression on him. The concert strengthened his determination to take up a career in music. What is more, he would become a composer.

Michael Tippett was an enthusiastic member of many of Sargent’s stage productions both for the school and for the Stamford Amateur Operatic Society. The picture below from 1923 shows the SAOS production of Merrie England, with Sargent in the centre and an 18 year old Michael Tippett as the King’s Fool, bottom right. 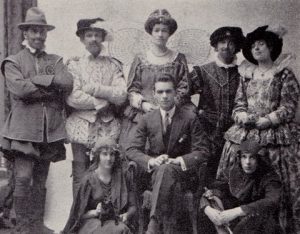 Tippett’s parents wrote to Sargent telling him they wished to, ‘put Michael to music’ and Sargent advised against it, citing how precarious the career of a professional musician could be. Happily his advice was ignored and Tippett entered the Royal College of Music where his tutor in the conducting class was none other than Malcolm Sargent. Tippett went on to become one of the greatest British composers of the second half of the twentieth century.

Tippet renewed his association with Leicestershire in 1964 when he agreed to become patron of the Leicestershire Schools Symphony Orchestra. Surprisingly, for a composer so much in demand, he was very active in his role as patron until the 1980s and was greatly loved by the young musicians whose company he enjoyed. He conducted the LSSO on numerous occasions in Leicester and other English towns and on foreign visits. He concentrated mostly on twentieth century music, including pieces he composed especially for the LSSO. Under Tippett the LSSO established new standards for music-making in an educational context.

The author would welcome hearing from anyone who has more information on
Michael Tippett or the De Montfort Orchestra. Please contact me