Tour 2010: To Strasbourg on the 50th Anniversary of the Twinning

Strasbourg is a beautiful and fascinating city with lots of history. We in Leicester are very lucky to be twinned with such a place but it is quite difficult to get to. If you go by coach a whole day is required so an early start is recommended. The 2 coaches carrying Leicester Symphony Orchestra, their instruments and supporters left Leicester at 6.30 Saturday morning. At South Mimms there was a change of drivers and we were on the ferry at Dover by 11.25.

From Calais we had a gruelling 8 hour stretch ahead of us. The route passes almost down the line of the First World War front. We pass Cambrai where tanks were first used on a battlefield in 1917. We also pass near the place where George Butterworth was shot by a sniper. We travel on into the Marne valley where the von Schliefen plan was halted and the French and German armies got bogged down in what was to become 4 years of trench warfare.

We take a break before Verdun, the scene of many first world war battles, then pass into the long disputed territories of Alsace and Lorraine. The dispute has been running for at least 1200 years – so long before modern day France or Germany existed. The descendants of Charlemain could not agree on how his huge Frankish kingdom was to be divided. We arrive in Strasbourg around 10pm and were joined by our conductor Roland Melia who had flown in from Cyprus via Bulgaria – or so he would have us believe! 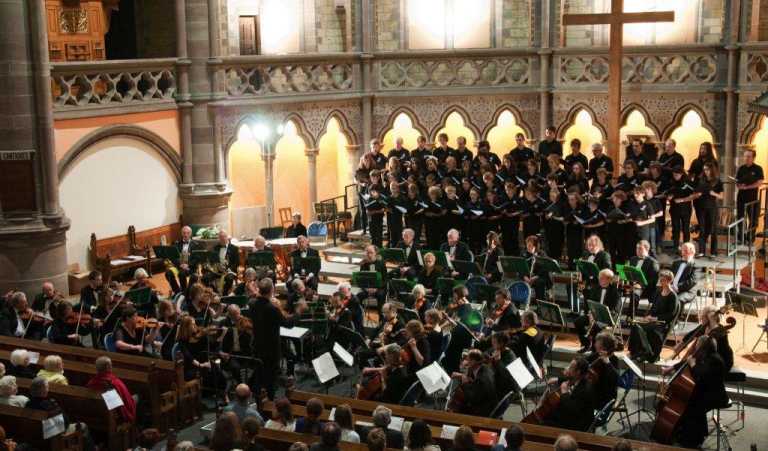 The next day, Sunday, we motored about an hour to Saverne, a pleasant enough town to spend a morning. The afternoon was spent in Marmoutier Abbey, a great location for the concert. The rehearsal was the first time we had met with the choir Les Petits Chanteurs de Strasbourg. Nobody knew quite what to expect but it was instantly apparent that the choir was of a very high standard so any doubts we may have had as to their abilities quickly put to rest. The concert was very well received by a capacity audience. We rounded a great day off with an evening meal in the nearby village of Haegen, which gave our coach drivers, Mick and Graham, plenty of opportunity to demonstrate their driving skills by squeezing the coaches through amazingly narrow gaps between buildings!

On Monday we took the coaches to 3 beautiful small Alsatian towns Ribeauville, Riquewihr and Kaysersberg. One of the features throughout Alsace are the storks which are encouraged by the locals by providing often elaborate rooftop nest sites. The storks feature hugely in the work of the celebrated local artist Hansi whose anti-German sentiment earned him a spell in prison for poking fun at those oh-so-serious Prussian soldiers. After a good look around we then went back to Strasbourg for a reception at the old Town Hall. Another excellent day was rounded off with an evening meal at the Au Pont St Martin, a superb restaurant in the Petite France area of the town.

Tuesday started off with a boat trip round Strasbourg’s historic waterway network. In the afternoon we gave our second concert, with the choir, at the Eglise St Paul. Again there was a very appreciative capacity audience.

Wednesday was our last day and there were various optional activities including a walking tour of Strasbourg, a visit to the Chateau Haut-Koenigsbourg and wine tasting at Obernai. In the morning a small group of us decided to branch out on our own. Using the very cheap and extensive local city transport network we took a bus to the bank of the Rhine and crossed the river on a footbridge. This all with the sole object of being able to say that we had set foot in Germany! Having accomplished this we had a great feeling of achievement. Our evening was spent at the restaurant A l’ancienne Douane – our third and final group meal.

Thursday, we set off about 8.30 for our long trek home. We arrived back around 22.30. We returned home tired but in the knowledge that something extremely worthwhile had been achieved.