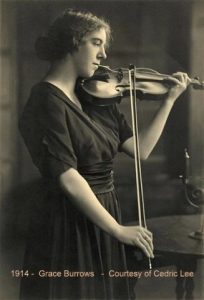 Grace Burrows (1893–1981) was an accomplished violinist at the forefront of performing and teaching in Leicester for 30 years. She played a central role in setting up and running Leicester Symphony Orchestra (LSO) which she led for 20 years. She actively promoted the cause of women musicians by her own example and by her work conducting and leading the pioneering British Women’s Symphony Orchestra. She was described in Charles Reid’s biography of Malcolm Sargent as, ‘a remarkable young woman’.

Grace was born and lived in the Highfields, then a newly developed area for fairly prosperous families of Leicester. Music played a huge part in her upbringing. Both her parents were musical; being noted performers and teachers. Her mother, Mary Elizabeth, (born Gray 1867), known as Elizabeth, was an excellent pianist. Her father Benjamin Harper Burrows (1864-1915) played violin, viola and later cello. He was a scholar and teacher of some repute and was closely involved with the Leicester Orchestral Union (LOU) from 1884 until his death. The LOU gave, in total, 29 concerts, usually annually, mostly in the Temperance Hall on Granby Street, then Leicester’s most important concert venue. With the death of her father and the outbreak of war there were no concerts for a six year period from 1914. It was decided that the LOU should be wound up. The final two concerts in 1920 and 1923 were led by Grace. 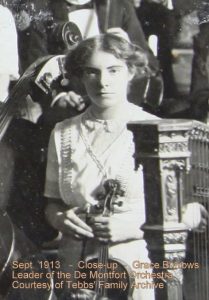 Both Grace and her brother Benjamin Burrows (1891-1966) clearly inherited their parents’ gifts in full measure. By the age of 20, Grace was already regarded as the best violinist in Leicester and was the natural choice of George Tebbs to lead his De Montfort Orchestra (DMO), Leicester’s premier orchestra, which gave its first performance at the opening of De Montfort Hall in 1913. Grace led the DMO and gave solo recitals for more than 10 years. This close-up of Grace is taken from a marvellous photograph of the DMO, a copy of which was donated by Grace herself to the Leicester Records Office.

The main event shown in the programme below from 1914, is an organ recital by her brother Benjamin, with a violin solo from Grace. By this time Grace had qualifications in both teaching and performing. She had realistic hopes of furthering her violin studies under the great Ševčík in Prague ,and was bitterly disappointed when the outbreak of war made this impossible.

Grace inherited 40 or so pupils from her father, who she taught from her house in Highfield Street. The picture, also below, like the one at the head of this article was taken professionally for publicity purposes and comes from this time. With typical industry, Grace is known to have published a series of exercises for violin and piano to aid learning. In addition her Pupils’ Orchestra met regularly in the Edward Wood Building (now Fraser Noble Hall) attracting numerous young musicians from Leicester and beyond. For one youngster, the gifted Mary Thornley (born Ashmell), Grace’s Pupils’ Orchestra was a gateway to recognition. Mary was recruited to the LSO by Grace when only 14, where she played a key role for an astounding 70 years. 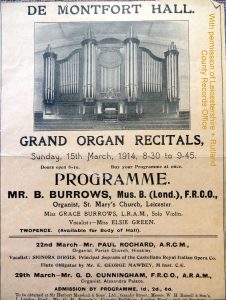 By the early 1920s Karl Russell (1888-1960), a Leicester music shop owner, must have been very aware of Grace. She had been involved with most of Leicester’s top music groups for ten years, either as leader in concerts and operas or as a soloist. It is also known she was leading the orchestra that accompanied the Melton Choral Society’s very first concert in April 1918 at the Drill Hall in Melton Mowbray where Malcolm Sargent (1895–1967) was choir master and organist. This concert was significant in Sargent’s career, being his conducting debut.

The most significant moment in Sargent’s rise to fame came in February 1921 at Leicester’s De Montfort Hall when he conducted his own specially composed piece An Impression on a Windy Day to a rapturous full house. Sir Henry Wood was so impressed by Sargent’s conducting abilities that he invited him to conduct the work at the Proms. It was clear to all that Sargent could attract an audience and Karl Russell, a local music shop owner and something of a impresario, saw an opportunity and approached Sargent proposing a series of four “Russell” Subscription Concerts. It is not surprising that Grace was integral to his plan.

It was Grace who mobilised the various forces needed for three of the Russell Subscription Concerts, the remaining concert being with a professional orchestra. Over the series, she recruited a ‘Festival Chorus’ from Leicester Oriana Choral Society and Leicester Choral Union as well as Stamford and Melton Operatic Societies. Her ‘Festival’ orchestra was known to have quite a high proportion of professional players, mostly from theatres and cinema pits around Leicester. These were supplemented by amateurs and semi-professionals, many from George Tebbs’ De Montfort Orchestra.

The first Russell concert was so successful that a decision was taken to build a full sized symphony orchestra to give regular concerts for the following season and beyond. Grace was appointed leader and took auditions for string players which were held on a hot Sunday afternoon in the summer of 1922. She also conducted rehearsals when Sargent was absent. As well as managing the new orchestra, the Leicester Symphony Orchestra, she had a seat on the governing body. The LSO gave its first concert in October 1922. There were to be four concerts a year, each concert having four rehearsals. In the first season the strength moved up from 70 to 80 players. 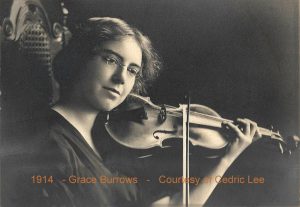 Grace Burrows led the LSO in every concert until 1939. In one concert in October 1935 however , she replaced Sargent on the rostrum while he played a Mozart piano concerto, the Leicester Mercury reported that she, ‘stood out both for her handling of the orchestra’ and, in the same concert, ‘for her delicate violin playing in the Dvorak New World Symphony’.

In addition to her teaching and LSO commitments, which were substantial enough, Grace had the demands of a young family. She had married Horace William Lee (1889-1976) in March 1919 but maintained her professional name, Miss Grace Burrows for musical activities. The couple had three sons. 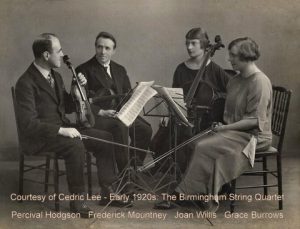 Today, Grace would probably be regarded as a feminist as, contrary to common practise, she was absolutely determined to maintain all aspects of her musical life after marriage. The family moved to Chiswick in 1936; a career move for Horace. For three years, Grace travelled to Leicester for concerts but the outbreak of war in 1939 made this very difficult and her last known LSO concert was in May 1943.

By 1920 Grace was playing viola in the the Birmingham String Quartet, founded by its leader Percival Hodgson. Chamber concerts were given around the country throughout the 1920s and the quartet clearly established a considerable reputation, recognized by the BBC who made a 45 minute broadcast of a Cardiff concert in 1927. The announcement in the Radio Times was supported by a copy of this photograph. Grace is pictured on the right. Unusually for the time, the quartet comprised two men and two ladies. 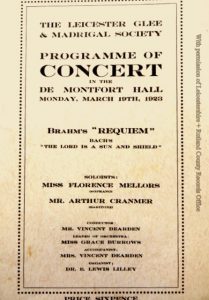 Among her musical activities in Leicester, Grace led most of the leading orchestras of the town including Leicester Glee and Madrigal Society, as shown in the programme alongside. We know that she also founded and led her own ‘Grace Burrows Orchestra’, her own string quartet and string orchestra. Details are sketchy but these seem to have had some kind of educational role, as on occasions she conducted what were known as ‘Lecture Concerts’. On more than one occasion, chamber concerts were given with Malcolm Sargent on the piano, such as the performance was given to the Leicester Chamber Music Society in 1934.

Grace was appointed part time lecturer in music by Leicester University in 1924. Her brother Benjamin was also appointed to the same department in the same year. Benjamin occasionally played with LSO whenever a supplementary pianist or organist was needed. The programme of December 1928, shown on the next page, is an example of this. Like his sister he is a highly significant figure in Leicester’s musical history and deserves to be better known. For this reason he is the subject of a short separate article. 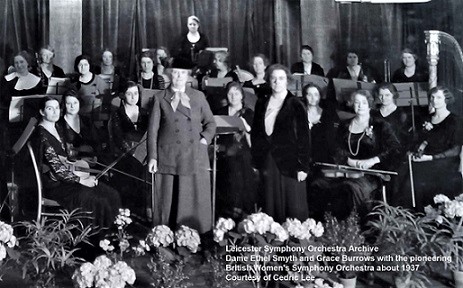 Dame Ethel Smyth and Grace Burrows with the BWSO

In 1932 Grace embarked on what was probably her most ambitious project, with the British Women’s Symphony Orchestra (BWSO). We know that Grace conducted at least six performances and led the orchestra for two. She was publicly commended for her work on more than one occasion by the great Dame Ethel Smyth, a leading composer and well known supporter of votes for women, who she may have met in 1925 when Dame Ethel guest conducted the LSO. There is an interesting piece of Pathé film showing Grace conducting the BWSO at the Queen’s Hall, then London’s premier venue. 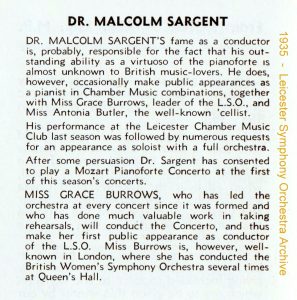 The BWSO gave its first concert in 1924, under its founder Gwynne Kimpton. From 1925 Malcolm Sargent took over the baton until prevented by illness early in 1933, when Grace took over. The detail alongside from the 1935 LSO season brochure, explains her work with the BWSO as well as her chamber performances with Malcolm Sargent. At her final concert with the BWSO in March 1937, Grace led the orchestra, and special mention was made in the press of her, ‘eloquent and persuasive solo passages in Rimsky-Korsakov’s Scheherazade’. I can find no mention of the BWSO after 1938 but it had clearly demonstrated that women could equal men in musicianship, virtuosity, application, and discipline and that a women’s orchestra could be the equal of any men’s orchestra. Today’s reader may be surprised that any such demonstration was needed and credit must surely be given to pioneers like Grace, who were prepared to push the boundaries. 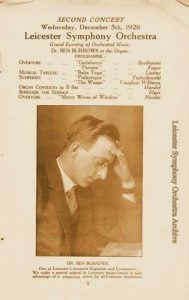 In Chiswick, Grace soon gathered pupils from all over London and the Home Counties. She also played a characteristically full part in the local music scene, playing violin or viola in groups and orchestras such as the Surrey Philharmonic Orchestra and the Kathleen Riddick String Orchestra, giving concerts in Chiswick Old Town Hall. She was also a visiting violin teacher at Wycombe Abbey School for Girls.

In the post war years Grace made occasional visits to Leicester for concerts. Her most regular appearance was at the invitation of George Gray, the esteemed organist at Leicester Cathedral. This was to lead the orchestra in the Leicester Bach Choir annual Eastertide performance of works such as Bach’s St Matthew Passion.

In 1966 her brother Benjamin died and Grace played violin at the memorial service at Victoria (now University) Road Church. This included several of Benjamin’s own compositions. After his death she helped further the cause of his music by collecting and publicising his works. She had always felt proud of her brother’s achievements; there seemed to be a special bond between them. Like many of the, admittedly few, people who knew Ben Burrows’ music, she genuinely believed much of it had great merit. The collection is held in the Leicester University Library Archive.

In her later years Grace moved, with her husband, to Warsash near Southampton, to be nearer her eldest son. She died aged 88 and is buried with Horace in Warsash.

Full versions of the illustrations are available on request. The author would welcome hearing from anyone who has more information on Grace Burrows. Please contact us via our Contact Form.