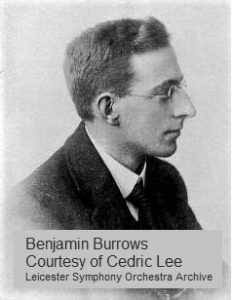 Benjamin Burrows (1891–1966) was a brilliant music teacher, organist, pianist, composer, and inventor. He came from a musical family and played for Leicester Symphony Orchestra (LSO) whenever an organist or supplementary pianist was needed. He was the brother of Grace Burrows (1893-1981), who played a central role in the creation and running of the orchestra.

Ben was a pupil at Alderman Newton’s Boys’ School. He showed such a marked aptitude for science that he moved to a school specialising in this. Later he was tutored privately, which was felt necessary due to a serious problem with his left eye. Music played a huge part in his upbringing; his parents being noted performers and teachers. Both Ben and his sister Grace clearly inherited their parents’ gifts in full measure.

Unsurprisingly both children pursued a career in music. Ben’s organ teacher was H B Ellis, a genial and kindly man who had conducted the Leicester Amateur Vocal Society since 1879. In 1886 this had evolved into the Leicester Philharmonic Choir, one of Leicester’s longest established and finest musical institutions, which Ellis directed until his death in 1910. At this point Ben succeeded Ellis as organist of St Mary’s (now St Mary de Castro).

He continued his studies under the guidance of Charles Herbert Kitson. With characteristic insight he quickly assimilated the principles of harmony, counterpoint and orchestration. In 1912 he became Associate, and soon after Fellow of the Royal College of Organists. In both exams he won recognition for achieving top marks. We know that by 1914 he had set up as a music teacher was giving organ recitals in De Montfort Hall, as shown right. His studies were interrupted by the war but he gained his doctorate in 1921.

In 1917, he served as a Kite Balloonist at Orford Ness in Suffolk. During this time he got to know Doris Katharine Hayes who had been a violin student of his sister’s. They were married in 1921 and their only child, Benjamin Hayes Burrows was born in 1925.

Ben had a short spell as organist at Leicester Cathedral, but in 1929 he was appointed organist at Victoria (now University) Road Church, a Baptist church, in line with his non-conformist principles. He remained there for 27 years.

A concert in December 1928 (programme shown below) was typical of Ben’s appearances with LSO. He was the soloist in Handel Organ Concerto in B flat. Both the Leicester Mail and the Leicester Mercury agreed that Ben’s performance was the h 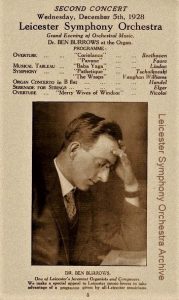 ighlight of the evening and, ‘was such as to rouse the audience to demand an encore’ – in fact, ‘the only encore of the evening.’

Ben was appointed Lecturer in Music at University College, Leicester in 1924. His sister Grace was appointed to the same department at the same time. Ben tutored students in organ and composition up to PhD level for 30 years and was known to be generous, sympathetic and encouraging. Many of his students were living all over the world, as shown by a crop of flags pinned to a map on his studio wall. They were prepared by correspondence which was unusual, if not unique at the time. In teaching composition, it seems Ben had an encyclopaedic knowledge of the subject and had developed an almost computer-like system for keeping all aspects of his craft at his fingertips. One student described Ben as, ‘without peer in the teaching of musical theory throughout the country’. Another declared he, ‘was a marvellous teacher, as his successes show. A few words from him verbally or scrawled on an exercise, were worth books of others!’ The successes referred to are listed in his last advertisement in the Musical Times. Among them are 24 Doctors of Music, 56 B Mus, and 104 FRCO, statistics which need no comment. 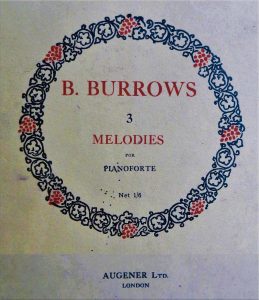 His own compositions, composed with prodigious speed and fluency, included over 150 songs and a large collection of instrumental works for various combinations of players. In an intensively productive period, around 1927, he wrote 93 songs in 21 months. Ben’s work was regularly published throughout his life – sometimes by well known publishers such as Schott and Augner, shown right – but more often by Bodnant Press which Ben founded himself, mainly to get his own work published. In addition to compositions, there were many technical exercises and helpful guidance leaflets for students and performers. 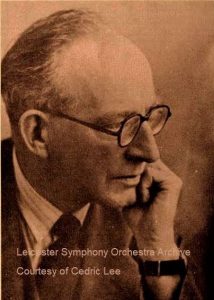 Olga Weston, for many years the LSO’s harpist, played for Ben on several occasions when he had composed a new piece and wanted to try it out. After his death, his compositions were collected both by his sister Grace, who believed much of his work to be of great merit, and his pupil Brian Blyth Daubney. It is thanks to Brian we know so much about Ben’s life and works. The works form the basis of a Special Collection held in the Leicester University Library Archive, the introduction to which affirms Ben to be, ‘One of the most significant musicians and composers associated with Leicester’, and continues, ‘The music and reputation of this unassuming man deserves to be much better known; not only is he a major figure in the British musical scene of the 20th century, he is a person of whom the city of Leicester ought to be proud.’ 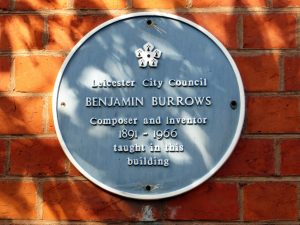 Ben’s reputation as the most eminent theory teacher in Britain was recognised by Leicester City Council who honoured his life and work with a Blue Plaque outside his old studio at 2 University Road. It reads, ‘Benjamin Burrows 1891-1966 Composer and Inventor taught in this building.’

Sources: Interview with Cedric Lee, Grace’s only surviving son and Ben’s nephew on 11 June 2017.
We have particular insight into his extraordinary story in a remarkable account of his life and work given by a former pupil Brian Blyth Daubney dated 1987. This can be found at: Brian Blythe Daubney; thesis Benjamin Burrows 1891-1966.
The collection of Ben’s work held at: Leicester University Special Collections. (Currently not available online.)
Thornley family knowledge – interview with Olga Weston. LSO Archive.