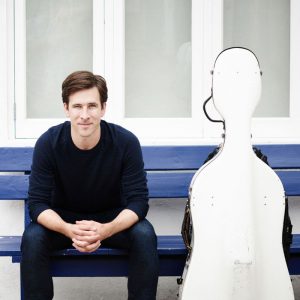 Guy won Young Musician of the Year in 2000 and performed the Elgar Cello Concerto at the first night of the Proms in 2001.

Since then, he has forged an international career as a soloist and chamber musician, and is also Associate Professor of Cello at the Eastman School of Music in Rochester, New York, where he himself studied.
But he has fond memories of Leicester, having played at the International Festival and with both the Leicester Symphony Orchestra and Bardi Orchestra in De Montfort Hall.

Ahead of the performance we asked him a few questions – about his career and the concerto itself:

What cello do you play?
My instrument was made in 1714 by David Tecchler, a German maker who moved to Italy. To celebrate it’s 300th birthday I commissioned three new pieces; took the instrument back to Rome and gave a performance in the house in which Tecchler made it!

What are your memories of winning Young Musician of the Year and what opportunities did it open up for you?
It was extraordinary and opened up all sorts of opportunities and new repertoire for me. I broke a string during the final, but you just have to change it and get on with it – just as you do if your spike slips.

You played the Elgar at the Proms aged just 20. Isn’t that very young to be tackling such a huge piece?
Yes, but Jacqueline du Pre was in her early 20s when she made her iconic recording of it. Your performance develops as you get older and gain more experience of life. That helps you get inside it and deepens your emotional connection with the music. I think I have a lot more to say about it now than I did then.

How do you approach playing such as well known piece?
You have to get hold of and make your own and interpret it as you want to. You have to get in the right frame of mind to really connect with it – it has to be all consuming and the pacing is key. There is a key pyramid between the soloist the conductor and the orchestra; they must stay together and keep feeding off each other.

Where else notable have you played it?
All over Europe and beyond – and as far away as Tokyo. It is one of those pieces that keeps coming back. My brother gave me a facsimile of the original score with all the markings, which showed where Elgar had changed things or made additions. One notable performance was in Malvern – very near where Elgar lived at the time he wrote it. I went walking in the Malvern Hills, which was apparently how he found some of his inspiration for the composition. And I also gave the first ever performance of the work in the Faeroe Islands, with orchestral players flown in from Denmark and Iceland. It felt very remote, essentially playing it in the middle of the Atlantic Ocean.

The piece celebrates its centenary this year:
That is important. Elgar lost a lot of friends in World War One and this piece is an elegy to them – as were many other pieces composed just after World War One. Everyone realised that after the war the world would never be the same again.

Why do you think it remains so popular?
Because it is a piece that can really move people. It works well with a big or small orchestra and has a real impact because it is orchestrated brilliantly. The opening is so dramatic and it builds through the first movement; that is followed by the really lively scherzo. The heart of the piece is the slow third movement which leads into the huge fourth movement where you really pour your heart out. But in the end, Elgar brings back the opening figure from the first movement as a way of closing the door and finishing the piece. It is as thought he is putting that in the past and saying we have to move on.

Most people know the famous du Pre / Barenboim recording. Are there any others you would recommend to them?
There is one dating from the 1920s with Beatrice Harrison as soloist and conducted by Elgar himself. One of my personal heroes, Steven Isserlis, has also recorded a very personal account of it.

And non-musical memories of the city?
The beautiful New Walk; running in Victoria Park; lots of lovely curry houses and the excitement of being in the city when Leicester City won the Premier League!

For full details and tickets for the concert and/or the tea contact the De Montfort Hall (box office 0116 233 3111 or via www.demontforthall.co.uk.