Latvian pianist Antonina Suhanova is looking forward to making her first visit to Leicester for a performance at De Montfort Hall with the Leicester Symphony Orchestra. 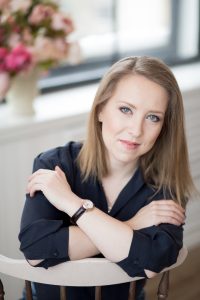 Antonina will be playing Shostakovich’s second piano concerto with the orchestra at its first concert in the 2021/22 season on Saturday 23 October at 7.30pm. The concert is being supported by the University of Leicester, which like the orchestra, is also celebrating its centenary soon.

Having been ‘locked down’ for over a year – and only teaching and performing recitals virtually – she is happy to be playing live performances: “Shostakovich’s first piano concerto is very well known, but the second is played far less, which is a pity because it is a great piece”, she says. “It is also a very humorous concerto, with a lot of positive energy to it”.

That humour comes from passages in which the composer inserts what are effectively a series of training exercises for the pianist, and also gives them to the orchestra to play as well. The concerto was written for his son Maxim – who went on to be a noted conductor – as an audition piece for his application to the Moscow Conservatoire. Antonina suspects the section would have been designed to make the adjudicators smile – while also showing off the performer’s capabilities.

Antonina spent lockdown teaching virtually and performing on-line recitals, and is relieved to be ‘back live’: “It was surprising at first and very rewarding to still be able to teach students and see them progress in such difficult circumstances. Live broadcast concerts were also a great experience, even though the personal connection with the listener is precious and can’t be substituted by anything”. And she is excited to visit the De Montfort Hall: “I’ve only seen it on-line, but it looks a beautiful building”.

In the concert, Leicester Symphony Orchestra will also perform a piece celebrating the heroic legacy of Richard III, written by local composer Ruth Martin, and the programme concludes with Carl Orff’s Carmina Burana, where the orchestra is joined by the Leicester Philharmonic Choir and Leicester Cathedral Children’s Choir.